‘Pak troops must be tried for 1971 genocide’ 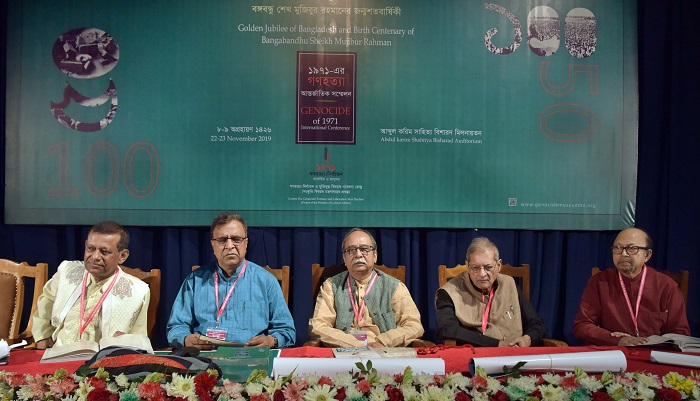 Bangladesh should approach the international courts to ensure the punishment of Pakistani troops who unleashed the furious genocide in Bangladesh in 1971, scholars opined.

Addressing an international conference on genocide, experts from home and abroad also lauded the government for ensuring capital punishment of the top war criminals through the legal process.

Over 50 local and foreign scholars attended the conference titled ‘Genocide of 1971’ at Bangla Academy in the capital on Friday.

Genocide and Torture Archive and Museum Trust in association with the Ministry of Cultural Affairs is organising the two-day conference, marking the birth centenary of Father of the Nation Bangabandhu Sheikh Mujibur Rahman.

They also emphasised raising the global move to gain international recognition of Bangladesh genocide to bring erstwhile West Pakistan army into the legal process for ensuring justice to the martyrs.

Sharing eyewitness of torture during the liberation war, State Minister KM Khalid said the Pakistani troops not only tortured the freedom fighters but also attacked families.

Khalid also appreciated the activities of Genocide and Torture Archive and Museum Trust and assured support for future initiatives of the patriotic initiative led by Prof Mamun.

Hindustan Times former Editor Hiranmay Karlekar, who covered the Bangladesh liberation war as a correspondent for the Statesman, shared the furious experience during operation searchlight on eve of the liberation war in Dhaka.

Including Hiranmay, there were a total of 35 journalists confined into InterContinetal Dhaka as the Pakistan troops began the massacre in Dhaka and adjacent areas.

Dhaka University Prof Muntasir Mamun said Bangladesh has to go through the sorrow stories of liberation struggles alongside celebrating victory against Pakistan.

“We have set up Asia’s first genocide museum to review the brutality of Pakistan and their local collaborators. A nation never moves forward without considering its past. Bangladesh also experienced an uprising of communal forces in the patron of BNP founder Ziaur Rahman during the post-1975 period and his spouse Khaleda Zia brought the collaborators like Nizami into power,” Prof Mamun added.

Indian researcher Jawhar Sircar said Bangladesh and India have been enjoying the maximum heights in the bilateral relationship in last one decade.

“Bangladesh is on the right track on development as a secular state. The success stories of the country are very significant for India as a close neighbour. We should keep in mind that there is no alternative to reach the message of all-religion secularism among mass to the establishment of secularism,” said Sircar, former CEO of Indian state-run media Prasar Bharati and a former secretary of the Indian government.

Five working sessions were held on the first day of the conference focusing on recognition of the genocide that took place during the Bangladesh liberation war in 1971.

Your ticket for the: ‘Pak troops must be tried for 1971 genocide’

‘Pak troops must be tried for 1971 genocide’